The i4 Process Designer is a front-end application that runs on a browser and is embedded within the i4 Studio. It allows the user to design the initial version of the i4 App by connecting the different internal functionalities and features. These internal modules of a i4 App have been initially published in the i4FS Marketplace. The Process Designer generates NodeJS source code forming the initial skeleton of the i4 App.

For developing the i4 App skeleton, the developers need to have access and re-use the following i4FS elements:

i4 Studio
The development of any i4 App starts with the access to the specific development IDE that i4FS provides. Inside the Studio, a link to the Process Designer is provided to allow the developer to first generate the skeleton of the vApp by re-using different i4 Assets. Once the skeleton is ready, the NodeJS source code generated by the Process Designer is accessible inside the source code tabs of the Studio for a final fine-tuning, connection with Frontend UIs, and bug-fixing.

i4 Assets
The i4 Asset are any type of asset, library, component developed by i4FS means which have a specific functionality – as an example, a driver to access a given machine. Then the developer can interactively define the inputs, outputs, etc. of the chain of i4 Assets that will form the skeleton of the i4 App. 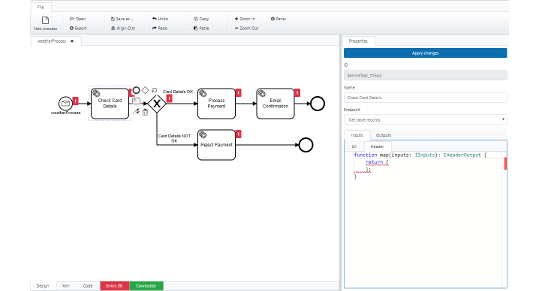 Easy use of features and components provided by i4FS Marketplace.

Provides an easy and user-friendly GUI for developers to draft i4 Apps internal processes and configure service tasks.

Transform the process model into NodeJS code for the developer for its final deployment within the Studio.

Part of the Development suite provided by i4FS with direct connection with the Studio and the i4FS Marketplace and indirect with all other i4FS components.

Learn more about i4FS by visting the project website for general information, the wiki for information about the core components, the Technical Manual for API documentation, and downloading the repository’s source code.

Get a better understanding of the global architecture and information flow.
Learn more

Our source code is opensource and available on our Gitlab repository.
Learn more

Let your infrastructure communicate with the i4 Platform.
Learn more
Manage Cookie Consent
We use cookies to optimise our website and our service.
Manage options Manage services Manage vendors Read more about these purposes
GDPR preferences
{title} {title} {title}